The first time I saw a picture of the R, was in the ‘Spyderco Story’. I was never attracted to the cut-outs, unlike many others, but I did like the lines of the knife a lot. It is not just and Endura with a cut-out blade. It is a new and separate design. Unfortunately, production of the original R was limited and the model was not to be found in stores when I decided to want one. 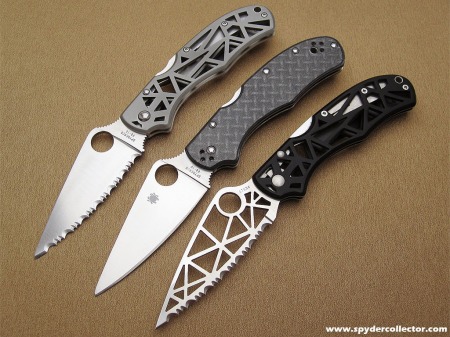 Handling
When the R2 was announced, I jumped at it. I see the R as a slightly more compact Endura. The Endura won’t fit my hands well, but the R is something else. It gently locks in my hand. And it’s nice and thin for comfortably IWB carry. The cut-outs in the handle are not in the way at all, they help with retrieving the knife from the waistband or pocket. 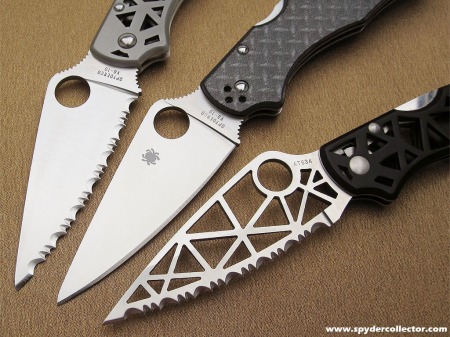 Cutting with the R2
The blade on the R2 cuts extremely well, just like a Calypso Jr.. If you’re looking for a cheaper lighter alternative for the Ti ATR, the R2 is just the ticket. The grey aluminum feels much like the Ti handle of the ATR. 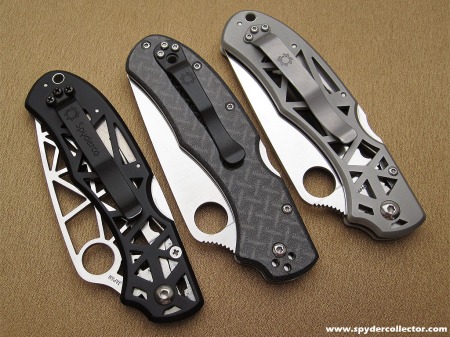 Found the Original R at last
Then, while sifting through the stock of a former dealer, I found the original R. It wasn’t on any of my wishlists, but I just had to get it. The deal was quickly made, and the original R was now mine! The cut-outs are beautiful in person. Nicely finished and flawlessly cut; I did not expect that level of production quality. The hollow ground can also be seen in some of the pics I took, amazing that they managed to incorporate that as well (opposed to using a full flat ground blade with cut-outs).

This entry was posted on Tuesday, October 3rd, 2006 at 4:47 pm and is filed under Collectibles. You can follow any responses to this entry through the RSS 2.0 feed. You can leave a response, or trackback from your own site.