What’s the current SKU number for new Spyderco knives? It’s up there in the C250s right? Could you imagine a C24? That would almost have to be some sort of stone-age Spyderco right? Yes, that’s right. However, the C24 is more than just an old Spyderco. It still is a viable EDC folding knife. But there’s more. The BlackHawk offered a few features we still appreciate today. Without the Blackhawk, we wouldn’t have the C41 Native (5) or the C210CF Rhino. 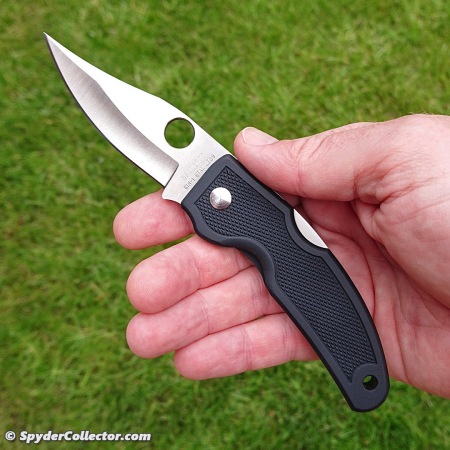 I got this vintage Blackhawk from someone’s collection. The knife had seen some very light use, and appears to have been stowed away in favor of a newer knife. The overall finish and condition appears pretty much like it came from the box.  I cleaned off a little tape residue, rinsed out the handle and pivot, dried it and applied some lube. Five minutes on the Sharpmaker put this beauty back in action again.

Performance
The action is still good, but the BlackHawk requires more frequent lubrication than, say, my current production G10 Native 5. The lock-up on the C24 is still very good. The lockbar and blade don’t line up as flawless as on a current Native, but it’s still reliable and functional. Edgeholding isn’t anything to write home about, it is GIN-1, but I like softer steels. VG10 is probably my favorite steel; I rotate a lot so edgeholding isn’t a practical consideration, and it’s oh so easy to sharpen and it always cleans up looking like new. As an added bonus, the GIN-1 blade is as stain resistant as they come, without delving into LC200N or H1 territory.

Clip
Unfortunately, the C24 features only one clip mounting option: tip-down. Luckily, the clip is mounted way lower than most people prefer these days. As I prefer IWB carry, it means I can easily grab and draw this folder for chores and such. The checkering on the aluminum handle is still very sharp and grabby.  Aluminum adds a bit more weight than we’re currently used to. For practical purposes, the aluminum BlackHawk feels heavier than a G10 native, but a lot lighter than a steel handled Delica. 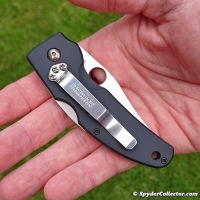 Proto-Native
What makes the BlackHawk especially interesting, is that it is very much a ‘proto-native’. Sure, it has a slightly upswept clippoint blade, as opposed to the Native’s spear point design. And the C24’s handle tapers down towards the end, but the Native used to have that as well. I realize that no Native has ever been made using a handle made from aluminum. However, the BlackHawk’s overall profile is -very- similar to the Native. The 50/50 coil was first introduced in the BlackHawk, and made famous in the Native (and Calypso designs).  Size-wise, the C24 is also very similar to the C41. When you hold and use the BlackHawk, it’s obvious, it feels just like a Native. 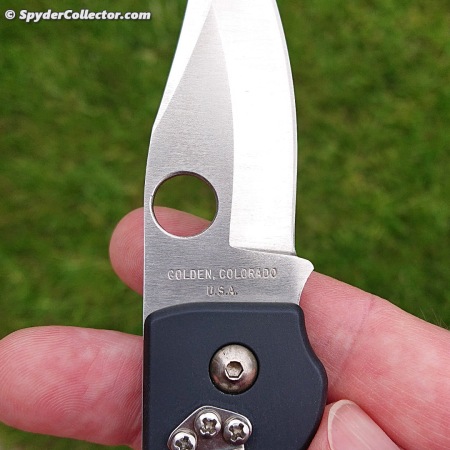 Overall
The C24 BlackHawk appears to have been reasonably successful for Spyderco. It was offered between 1994 and 1997. In 2002, a small run was made using existing parts. Three years appears to be a standard lifetime for a new design in the Spyderco catalog. To date, there haven’t been sprint-runs or exclusives based on the C24 BlackHawk. I think this is a shame actually, as I really like this medium-sized trailing point design. The fine tip and curve definitely has its place in practical cutting chores. It explains the success of the current production C224CF Rhino. I can’t help thinking Spyderco was sure the Rhino would do well, due to the experience of the BlackHawk some 25 years earlier.

Check out more details of the Spyderco C24 BlackHawk at Spydiewiki.