The Spyderco Lil’ Native backlock is probably my favorite knife from the past year, at least from an EDC point-of-view. This little folder is very useful, very ergonomic, very cool and very Spyderco in every possible way.

The C230 Lil’ Native Backlock is, simply put, a ‘baby’ version of the C41 Native. If there’s one thing that Spyderco is really good at, it’s making small folders that perform really well. Just ask anyone who owns a Dragonfly, Ladybug, Meerkat or any of their many other small folders. Spyderco sometimes calls their diminutive powerhouses ‘lil’ big knives’. Knives that measure small, but perform big. The Lil’ Native is no exception. The C230 was made in two variants, one with a compression lock and one with a mid-backlock locking mechanism. Being an old fart, I prefer the ‘proper’ backlock version as that is how Native folders have been made since the beginning. The backlock version just feels right to me, for a Native.

Purpose
I’m not sure of the precise backstory of the Lil’ Native’s design. It is likely that Spyderco made the design after customer requests. At the same time the Lil’ Native came out, the larger Shaman came out as well, and I have seen regular requests online to make a larger Native. Both offered size variants of the venerable C41 Native. Why would one want a smaller Native? For one thing, it’s a great ergonomic and functional design, and a smaller version is easier to use in public among non-knife people. Also, if you pay close attention to how much edge you actually use in daily cutting tasks, you’ll notice it’s deceptively little. Living in a modern urban environment, most of your cutting tasks can be accomplished with a 2,5 inch blade. If that’s all you use, then a more compact knife makes sense.

First impressions
The fit and finish on the knife are superb, but that’s not a surprise considering my experience with the Native 5. One new feature I like in the Lil’ Native, compared to my older G10 Native 5, is the lack of liners. The Lil’ Native is a thick and stout little knife, but it’s also very lightweight thanks to that linerless construction. At first glance, I was a bit disappointed with the stonewash finish. I usually prefer a regular satin finish. The eye wants something as well, as we say in Dutch. Although the Lil’ Native is only 15% smaller than the regular Native 5, it looks a lot smaller. In the hand, the grip is very similar to the Native 5. The Lil’ Native doesn’t feel small at all. 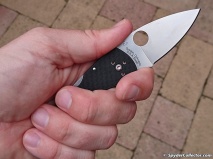 Working the knife
Using the knife to break down cardboard was a joy. The thick blade and ‘lock in’ handle ergonomics make it easy to just stab in a big box and slice down. I also used the little folder in my garden, pruning some plants and bushes. The handle makes holding onto the knife while push cutting through some tough branches very easy. I guess that full flat grind blade helps as well ;-). Some might say that such a thick blade isn’t necessary in a design this small. That may be, but that’s also missing the point of the Lil’ Native. Spyderco doesn’t refer to it as a lil’ big knife for nothing. The Lil’ Native’s blade is thicker than a Chaparral for sure, but it’s no Medford-type brick either. Not by a long shot. The blade thickness is the same as the regular Native 5, that’s all. And this smaller folder really does cut like a much bigger knife. 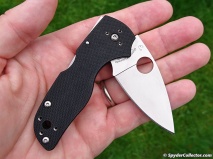 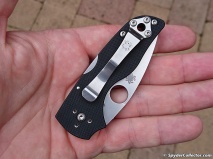 The S35V steel is a familiar performer. It’s a solid middle-of-the-road steel for me. It cuts  long enough to impress most, and it sharpens easily on a Sharpmaker. It also doesn’t rust. The past few months, boxes, zip ties, flowers, envelopes, fruit, and loose strings could not escape the edge of the Lil’ Native – it’s a very fun knife to use.

I might pay attention to the tip of my Caly 3.5 or Chaparral, but not so with the Lil’ Native. It’s a very confidence inspiring little folder. I’m tempted to share one with my cop friend, who has a genuine talent to really mess up any knife he gets his hands on. 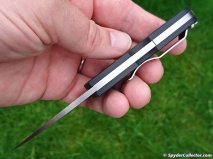 Negatives
The stonewash finish on the blade is fine for a working knife, but I’d prefer to see a regular satin finish on the blade. Also, the clip could’ve been finished more ‘upscale’ if it were up to me. And I certainly wouldn’t mind a few more color options than just basic black, but that’s just me. If the Lil’ Native Backlock would become available in a nice S110V version with that blurple G10, I’m down for one or two. Then I’ll pass along this boring black G-10 version along to my cop friend and see how these stout lil’ folders really hold up! 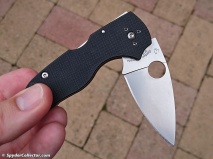 Overall
This is a superb folder, period. I feel it’s not so much a ‘mini-native’, but more like a ‘mini-lil’ temperance’. I’m pretty sure this backlock variation won’t last long, since the market usually prefers a new lock design over something as ‘old’ as the backlock. But the lock certainly is not obsolete, and neither are the Spyderco native pattern of folding knives. With variations like these coming out, it’s proof that many people still love this proven design. If you’re eyeing the Lil’ Native with a backlock, I wouldn’t wait too long. 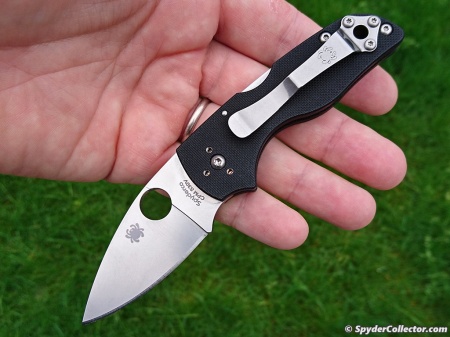 This entry was posted on Monday, March 4th, 2019 at 9:01 pm and is filed under Carry Folders, News. You can follow any responses to this entry through the RSS 2.0 feed. You can leave a response, or trackback from your own site.